November 07, 2018
Recently, Stone World published a report about the Office of the U.S. Trade Representative releasing a list of approximately $200 billion worth of Chinese imports that will be subject to additional tariffs, including quartz and a range of natural stone products. Effective September 24, 2018, the additional tariffs were set at 10% and starting January 1, 2019 they will increase to 25%.

Cambria has come out with a press release titled, “Duties on imported quartz surface products may apply to shipments from as early as June 2018.” The release states: “Today, Cambria filed critical circumstances allegations with the Department of Commerce (“Commerce”) and the International Trade Commission (“ITC”) to stop the surge of Chinese quartz surface products imports into the United States following Cambria’s April 2018 filing of antidumping (“AD”) and countervailing (“CVD”) duty petitions.”
Imports of quartz surface products from China increased by 81% after Cambria filed its petitions at Commerce and ITC, greatly exceeding Commerce’s 15% threshold for supporting a finding of critical circumstances. Both Commerce and the ITC must make affirmative findings of critical circumstances for AD/CVD duties to be applied retroactively.
This news closely follows Commerce’s announcement that preliminary countervailing duties ranging from 34.38% to 178.45% would be imposed on quartz surface products from China. Commerce’s preliminary determination for the antidumping investigation and announcement of additional antidumping duties are due in November 2018.
An affirmative critical circumstances determination would apply the 34.38% to 178.45% countervailing duties to imports that entered the U.S. on or after June 23, 2018.  If Commerce makes a preliminary antidumping determination, preliminary antidumping duties would be additionally due on imports that entered the U.S. on or after approximately August 15, 2018. These rates are in addition to the Section 301 tariffs announced by the U.S., which took effect on September 24, 2018.
"Cambria is taking this action to stop China’s illegal attempts to flood the market before the imposition of antidumping and countervailing duty orders,” said Marty Davis, president and CEO of Cambria. “Chinese producers and U.S. importers are on notice – substantial duties may be required for any quartz imports since June 2018. We at Cambria and our partners in the industry will continue to stand together to fight back against the illegal efforts to use unfair and unlawful trade practices to exploit the U.S. market.”
Cambria’s petitions allege that the increase in Chinese imports has injured the domestic industry and threatens further damage if duties to offset China’s unfair trade practices are not imposed. Commerce is scheduled to issue preliminary antidumping determinations in November 2018. If both Commerce and the ITC both make final affirmative determinations in their investigations, final duties could be imposed in May or June 2019.
In response to the recent decision by the U.S. Trade Representative, Stone World reached out to Rupesh Shah of MSI for comments on the ruling.
SW: Talk a bit about the results.
RS: MSI has been planning carefully for several months to continue to meet the needs of its valued U.S. customers, notwithstanding both the Section 301 tariff (currently 10% ad valorem) and the antidumping and countervailing investigations on imported quartz surface products from China. I am very concerned, however, about what these border taxes will mean for others in the industry, particularly U.S. fabricators who contribute thousands of jobs, millions of dollars in annual capital investments and hundreds of millions of dollars in annual revenue to the U.S. manufacturing economy.
SW: How do you/MSI feel about the results?
RS: On the Section 301 tariffs, like a host of other industries, it is very challenging because we are caught up in a much larger trade conflict between the USA and China. The outcomes thus were not a real surprise. On the dumping and subsidy case brought by Cambria, the outcomes to date – though disappointing – are also not a surprise. In this Administration, it is exceedingly rare for the U.S. Department of Commerce not to find dumping and subsidization, particularly if the case involves imports from China. I think the success rate for a Petitioner like Cambria before Commerce is in excess of 95%.
SW: How do you and your company plan on moving forward from this?
RS: We are going to fight Cambria’s claims at the ITC, which will decide next year whether imports are causing material injury to the domestic industry producing quartz surface products. The ITC is an independent body that will examine the facts very closely and listen to the views of both sides. The ITC tends to make balanced decisions, and recently ruled against petitioners (such as Cambria) in investigations involving aircraft, car parts, and silicon metal. We think that the facts will bear out that Cambria is doing well and is not being hurt by imports from China. It is clear that Chinese imports don’t compete with Cambria’s products. It is also clear that quartz prices are rising, and that Cambria is making money hand over fist. These are the type of facts that the ITC will scrutinize carefully before making its final injury determination.
SW: How will it affect fabricators?
RS: First, this is going to negatively affect fabricators’ businesses almost immediately. As we all know, fabricators sign contracts with builders and other customers where you can’t simply change the price overnight. While we still await the Anti-Dumping duty, a combination of section 301 and the Countervailing Duty is already above 40%. Fabricators are going to get hit by a combination of reduced demand related to price increases combined with short-term losses where they are not able to increase price immediately. Certain channels such as multi-tenant, builders and entry-level residential remodeling will simply be forced to stop using quartz and move to less labor intensive product categories, ultimately negatively affecting U.S. manufacturing jobs.

Second, and just as significant, is that fabricators are going to have to reduce their choices to their customers as quartz sourced from China becomes economically unpractical. Today, Chinese quartz represents approximately 50% of the market. The factories in China were innovators in many different types of quartz looks, including the most popular looks in the market today such as Carrara, Calacatta and other white marble quartz looks. For many of these colors, there is simply no alternative today from other factories around the world, and for some colors, where there is capacity, there is not enough capacity to meet existing demand.
Finally, fabricators should know that Cambria is looking to impose these border taxes retroactively on their imports. This could mean that all imports of Chinese quartz that entered the U.S. after the middle of June 2018 will become dramatically more expensive after-the-fact. If Cambria is successful with their desire to impose these taxes retroactively, there are hundreds of fabricators who will get hit with additional duties in the tens, if not hundreds of thousands of dollars. As we know, this could cause severe financial harm to many in the industry. Keep in mind, Cambria is also in the fabrication business and competes with fabricators in many markets across the U.S.
SW: Anything else you want to add that you think is important for fabricators to know?
RS: Cambria has structured its case to try to exclude the fabricators from the ITC injury proceeding. Cambria wants the U.S. Government only to consider its perspective, to the detriment of all others in the industry. That is why Cambria has been unfairly denigrating the fabrication industry during this proceeding. This is a direct quote from Cambria about the fabricators’ role in the industry – fabricators are “operations out of small spaces such as garages with only a couple of employees, a saw and a hand-router.” We know that is not true. In fact, we believe fabricators invest more in capital and machinery per square foot of output and add more value per square foot of installed countertop than is added in the portion of manufacturing of converting quartz sand into slabs. Fabricators account for tens of thousands of U.S. manufacturing jobs compared to just a few hundred manufacturing jobs at Cambria. The fabricators should reach out to the U.S. International Trade Commission as soon as possible in order to let their voices be heard. We need the fabricators to make this point to the U.S. Government, and we need them to do it now.  The best way to do that is to reach out to the Investigators at the ITC in charge of this case. You can find their contact information at https://www.usitc.gov/investigations/701731/2018/quartz_surface_products_china/preliminary.htm.
src: https://www.stoneworld.com/articles/90406-tariffs-and-the-fabricator-a-discussion-with-rupesh-shah-of-msi


FireUps® is the granite and natural stone installers source for instant exposure to local and national markets with strategically Targeted Online Marketing Campaigns and proven Web exposure. FireUps provides local online marketing services for the small to medium sized granite surface installers with a focus on the proven results that will increase your bottom line. Our teams expertise in direct to consumer marketing is second to none, and we want to share how we can help ensure your business is found by the pro-active customer who is searching for counter tops made from granite, stone, marble or other stone surfaces. Just the niche product or services you provide!
FireUps® will put your counter top product, installation service and surface remodeling company on the virtual map and generate a buzz that you could never have imagined. We focus on maximizing your return on investment through a clear understanding of your business objectives and by translating your value proposition to your customers! If you want to do more counter top installations tomorrow,
partner with FireUps® TODAY! 603 617 3877

Popular posts from this blog 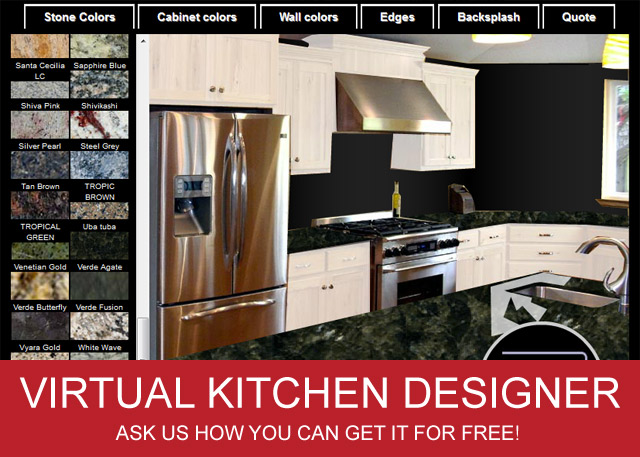 The virtual kitchen designer is a great tool for moving the customer through the buying process while associating them to your brand. It will save you time looking at slabs in the stone yard and you will help people to envision the final product.

We are offering this for Freeto the first 100 people.  Additional terms and conditions may apply. Contact us for details
Call 877 877 1916 http://www.granitemakeover.com/fabricator/Free-Granite-Marketing.asp
FireUps® is the granite and natural stone installers source for instant exposure to local and national markets with str…
Read more

Every year at the same times the retail customer activity is the same.
During the transition into summer and memorial day weekend expect customers to be more "tire kicking" They are still interested in doing the countertops but they are distracted by other seasonal expenses.
Some examples of these distractions:
Outdoor clean up, gardening and plantingTravel plans to friends and relativesOpening the poolOpening camps and cottagesPrepping the boat for the summer seasonSchool transitions Graduationsetc. These activities distract from the focus of the kitchen remodel, planning activities and can take the consumers attention and expendable income away from the kitchen remodel.
During these times of slow down before and after we typically see things picking up.
You have a couple choice based on your own planning: Increase your exposure to maintain sales flowStay where you are to ride things out through the ups and downsIncrease the perceived value for the customers to attract cus…
Read more

Granite Countertops Marketing StrategyThe market for countertops has changed and it has changed very fast due primarily to the reduction in available work. We the sharp decline in new construction, the availability of diverse and green products as well as an influx of fabricators it’s not good enough that your fathers father started your business and you do really good work. People on all level of the income scale are pinching pennies and ensuring that the dollar goes just a little bit further.
Granite is still and will remain as the top product selected for countertops due to the qualities inherent in the product and the unique sense of individualism that comes with it. Our fight is not really with the other products in the space.  It is with each other and people moving into our territory and creates these price wars.
In this article I will talk about how we can compete and how we will maintain a level of business that you control. That…
Read more